Still Life with Fishes
Author: Giuseppe Recco
Origin: Unknown
Dating: 17th century
Material: Oil on Canvas
Dimensions (cm): 111,7 x 148,3
Inv. no.: PD0205
(This painting has been restored with the patronage of the Ave College from Guimarães.) 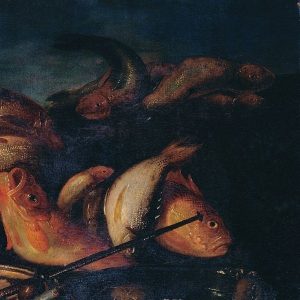 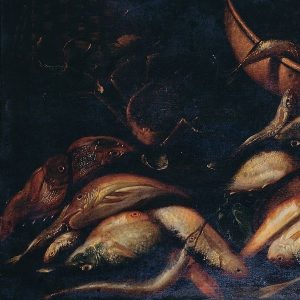 This painting displays a still life with fishes. Among the fish there are three copper vats, one containing water and the other fish. The artist introduced other elements such as cabbage leaves, an iron skewer piercing one of the fish and the sky. The latter is represented in darkened tones as during dusk. The representation of the fish uses a palette of vivid and luminous colours that contrast with the other elements, allowing the animals to be in evidence.

Giusseppe Recco was born in Naples in 1634. His father – the painter Giacomo Recco -taught him to paint. Some authors claim that he was also cultivated by his painter uncle Giovanni Battista Recco.

Recco painted mostly in Spain where his work was much appreciated. Most of his pieces were still lifes: scenes of cooking, game animals, flower arrangements, fish, meat, fruit, etc. In 1667, Carlos II of Spain ordered him as a Knight of Calatrava. He died in Alicante on May 29, 1695.