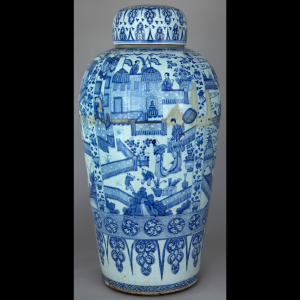 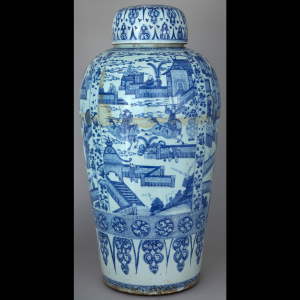 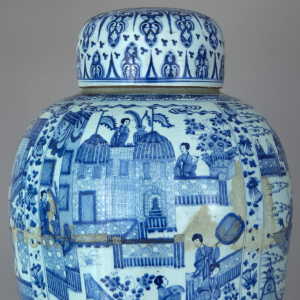 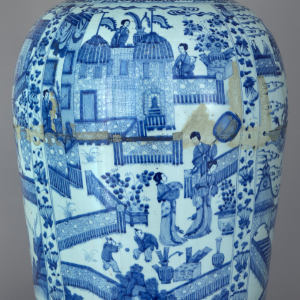 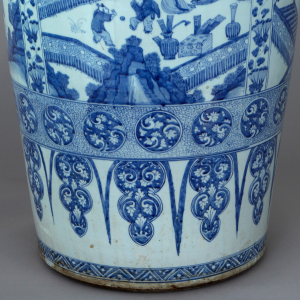 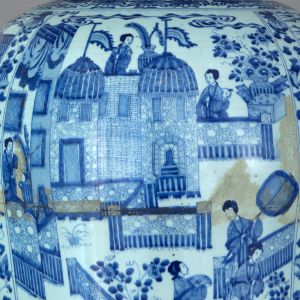 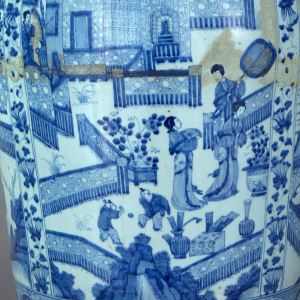 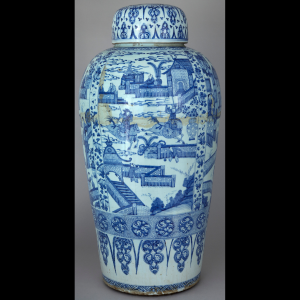 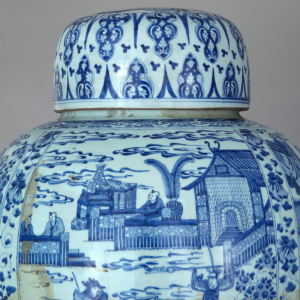 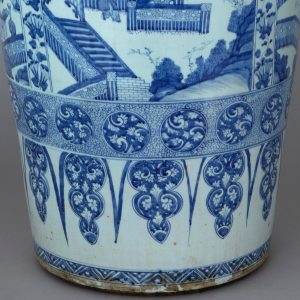 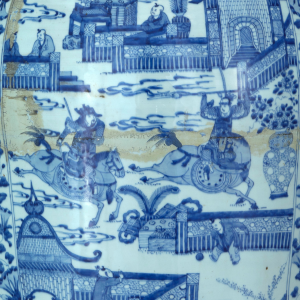 A pot completely covered by a lid with a flat top and without a handle. The decoration was carefully painted in cobalt blue under the glaze. It is organized into four alternating registers, as the body displays two episodes of what seems to be a narrative sequence. On one of the registers there is a representation of a bucolic scene in a palatial environment.

On top of a building – made of stone with western characteristics – and between two towers topped by domes with fringed banners, a very well-dressed female character is speaking to another woman who is carrying a child on her back. The background has dense clouds of a deep blue, which can be seen in other pots and precious items from ‘The Hundred Antiques’. On the left side of the building, there are two (almost overlapping) painted panels showing an interior scene: on the right-hand side, a female character seems to be looking at the garden where three ladies are walking while fanning themselves and, close to them, two children play with a ball between fences which are decorated in a ‘broken ice’ pattern, surrounded by flowering pots and pieces of furniture.

On the other register, two riders are galloping between dense blue clouds. Their swords are in their hands, displaying them as warriors. Several male characters are watching these riders. They are semi-hidden within fences and garden furniture which is similar to the one in the scene above described.

On the bottom, near a bridge, one may see what seems to be the access to the garden. Indifferent to the presence of the warriors, the same two children above mentioned, play with a ball between fences and surrounded by precious pots and pieces of furniture.

These episodes are separated vertically by a band of stems and peony buttons, symbolically connected to the theme of love and female beauty. Horizontally, a separation between two blue lines is composed of overlapping peony corollas.

The lid shows a wall filled with two courses of lobe-shaped leaves and triangles that flow without intersecting each other. Between them, there is a sequence of four small flowers.

On the top of the lid, there is a blue circle medallion where detailed objects from ‘The Hundred Antiques’ and from the ‘Eight Precious Objects’ may be seen. Among them there is a pot with a peacock feather, a ruyi scepter and a rhombus. These are the symbols in the Buddhist culture that represent prosperity, victory and success.